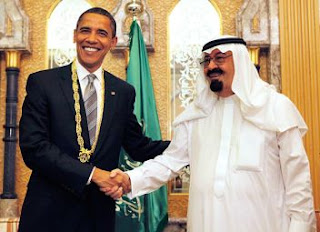 'The United States and Saudi Arabia — whose conflicted relationship has survived oil shocks, the Sept. 11, 2001 terrorist attacks and the U.S. invasion of Iraq — are drifting apart faster than at any time in recent history, according to diplomats, analysts and former U.S. officials.

The breach, punctuated by a series of tense diplomatic incidents in the past two weeks, could have profound implications for the U.S. role in the Middle East, even as President Barack Obama juggles major Arab upheavals from Libya to Yemen.

The Saudi monarchy, which itself has been loathe to introduce democratic reforms, watched with deepening alarm as the White House backed Arab opposition movements and helped nudge from power former Egyptian President Hosni Mubarak, another long-time U.S. ally, according to U.S. and Arab officials.