USA: Shutdown deal averts catastrophe but leaves the US economy in peril - by Zachary A. Goldfarb 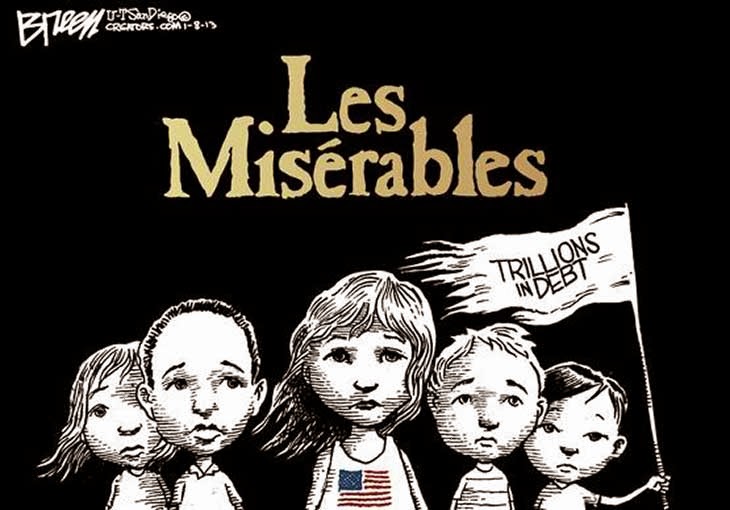 The deal reached by Congress on Wednesday to end the government shutdown and raise the debt ceiling averts a financial catastrophe but leaves the weakened U.S. economy facing new threats.

The agreement will send about 450,000 federal employees back to work and restart paychecks for the 1.3 million employees who stayed on the job during the shutdown. Getting those salaries back in circulation will help economic growth, particularly in the Washington area.

More important, the threat of a default on the national debt has been avoided, along with the recession and financial crisis that may have accompanied a failure to raise the borrowing limit.

But while the bipartisan deal ends a period of disruption that has slowed the economy — the shutdown removed more than $20 billion in direct government spending and related economic activity — it creates new perils, setting up other economy-shaking deadlines in just a few months.

It also does almost nothing for the country’s existing economic challenges, including automatic spending cuts that are worsening the problem of high unemployment and a long-term debt challenge posed by mounting costs in health-care and retirement programs.

Under the terms of the bipartisan agreement, lawmakers in both parties will spend the next two months trying to hash out a deal that could alleviate some of these risks. But there is little optimism that effort will succeed, given that several similar bipartisan initiatives in recent years have failed over disagreements about taxes and spending.

Read more: Shutdown deal averts catastrophe but leaves the economy in peril - The Washington Post
Posted by EU-Digest at 3:55 PM