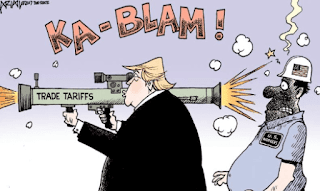 The European Union's retaliatory tariffs on US products came into force on Friday, the latest shots fired in what increasingly looks like a global trade war.

The EU, the world's largest trading bloc, imposed levies on 2.8 billion euros (S$4.4 billion) of American products in response to US duties on its steel and aluminum exports that were justified on national security grounds.

"We did everything we could to avoid this situation, but now we have no choice but to respond,'' said EU Trade Commissioner Cecilia Malmstrom. "It is frankly ridiculous that EU steel is considered a threat to US national security. As longstanding allies of the US, we were disappointed, but not surprised.''

The European reaction opens up another front in Washington's battle to reshape its commercial relationship with the world. President Donald Trump has levies on US$250 billion of Chinese goods in the pipeline and already placed duties on products from allies including Canada, Mexico and Japan..

Note EU-Digest: Maybe the time has come for Europe to start playing some "hardball" with Trump, and suggest to him it will stop buying military equipment from the US, that it wants to review NATO antiquated policies, its global strategies, and the need for European nations to participate, and pay for controversial US controlled missions around the world.  Most of which have resulted in failure, and a large influx of refugees into the EU and Turkey.