EU-US Relations: Isn't it time for a transatlantic divorce or at least a separation? - editorial 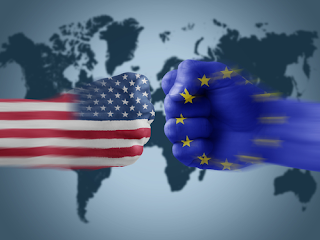 When the US President Trump went to Europe earlier in the summer his trip certainly did not score many positive points, but at least what it did was show the EU and its leaders that they had to start taking more responsibility for the direction in which the EU should be heading.

This hit home even harder when German Chancellor Angela Merkel gave a speech back home declaring "the times in which we could rely fully on others" are "somewhat over" and suggesting Europe "really take our fate into our own hands."

Interviews with six top EU officials paint a picture of a US president who is regarded even by allies as erratic and limited, and whose shortcomings are compounded by the ongoing chaos beneath him in the White House.

The US President has also become something of a laughing stock among European politicians at international gatherings. One revealed that a small group of diplomats play a version of word bingo, whenever the president speaks because they consider his vocabulary to be so limited. “Everything is ‘great’, ‘very, very great’, ‘amazing’,” the diplomat said.

But behind the mocking, there is growing fear among international and EU governments that Trump is a serious threat to international peace and stability.

But unfortunately the negative perception is not just about President Trump, it is also, and probably more so about the overall state of the country's totally disfunctional gridlocked political system.

Jamie Dimon, chief executive of JPMorgan Chase & Co, who  is known for his frequently outspoken comments and who turned down an opportunity to become Donald Trump’s Treasury Secretary, noted at a conference he was attending:  “It’s almost an embarrassment being an American citizen traveling around the world ... listening to the stupid s*** we have to deal with in the US,” he said. “At one point we all have to get our act together, or we won’t do what we’re supposed to do for the average Americans.”

JPMorgan Chase & Co, which under Dimon's leadership reported a profit of $7.03bn for the second quarter, 13 per cent higher than last year, has also made $26.5bn over the past 12 months, a record profit for a US bank, according to the Associated Press.

Eric Zuess, writing in Counterpunch: noted , "American democracy is a sham, no matter how much it's pumped by the oligarchs who run the country (and who control the nation's "news" media)," he wrote. "The US, in other words, is basically similar to Russia or most other dubious 'electoral' 'democratic' countries. We weren't formerly, but we clearly are now."

Like it or not, the US has become an oligarchy and is not a democracy anymore. The country is dominated by a rich and powerful elite. So concludes a recent study by Princeton University Prof Martin Gilens and Northwestern University Prof Benjamin I Page.

They come to this conclusion by multivariate analysis, which indicates that economic elites and organized groups representing business interests have substantial independent impacts on US government policy, while average citizens and mass-based interest groups have little or no independent influence.

In plain English: in the US the wealthy few move policy, while the average American has little power.

This brings us back to the need for the EU to seriously review their Transatlantic relationship with the US. because what used to bind the two continents together in the past, has disappeared, mainly because of a series of developments (described above) on the opposite side of the Atlantic.

For the Europeans it might look as an impossible task at the moment, but in reality won't be too difficult to do.

Let us keep in mind that the EU as an independent economic entity has the power to do so, all it requires now is the unity and will-power to follow through.

The only major objective it will require is unity among EU States, in carving out an independent foreign policy for the EU, which is detached from that of the US, specifically when it concerns military operations, in addition to economic policies and trade agreements.

In the past, what has been good for America, has not, or hardly ever been beneficial to the EU.

Specially the EU involvement in US Middle East wars, which caused the worst immigrant crises ever faced by the EU.

Also important to remember - The European Union is not a "tidly-bitly" disorganized group of nations. It  ranks as the world’s second-largest economy by gross domestic product, but few people globally see it as an economic leader ahead of China or the United States, according to a recent Pew Research Center report.

Even citizens of the EU don't seem to be aware of the power the EU has. Time maybe for the EU to start blowing their own horn - because when our own people are left in the dark, it's  no-one's fault except our own.


So EU Commission and EU Parliament, please wake-up, and smell the roses - the time is now to take serious and decisive action.

Where there is a will there is a way. The EU can't keep walking in "lock-step" with the US anymore